The development of Apps in Salesforce has changed a lot if we look back to 2014. Salesforce and its developer community has seen the migration from developing traditional Visual Force pages to modern Single-Page Applications framework like Aura (Lightning Components) and now accommodating the newest technologies with the help of Lightning Web Components (LWC) for building enterprise-scale applications natively for modern JavaScript browsers.

What is LWC & Why it’s important to test them?

“All code is guilty until proven innocent”

Testing is very important when it comes to the LWC. LWC components contain many different files including – HTML, JS Controllers, CSS, and Configurations. To have a production-ready code – it is a good practice to test components in isolation to verify API methods and events, user interactions like clicks, DOM outputs, and event fires.

The main advantage of LWC is that it has built-in Test-Driven Development (TDD), which makes tests easy to understand. Below are some widely used tools in Salesforce to test LWC

Jest is a testing framework of JavaScript mainly designed to ensure the JavaScript codebase preciseness and accuracy for unit testing. Jest works with almost all JavaScript frameworks and libraries. It is simple to use and can be easily extended to include various integration tests. Jest provides rich features for writing JS tests that are independent of any platform and can be executed locally.

Pre-requisite for Jest in LWC

Let’s take a look at some basics of writing tests with Jest.

If we have some statements that need to be executed for each test case. For that, we can use the beforeEach and afterEach functions to avoid code duplication. Both functions allow us to execute logic before or after each test.

In some cases, you only need to do the setup once, at the beginning of a file. This can be especially used when the setup is asynchronous, so you can’t do it inline. Jest provides beforeAll and afterAll functions to handle this situation.

A matcher is used for creating assertions in combination with the expected keyword. We want to compare the output of our test with a value we expect the function to return.

The complete list of matchers can be found here: https://jestjs.io/docs/using-matchers

Create a file with your component name – WelcomeMessage.test.js 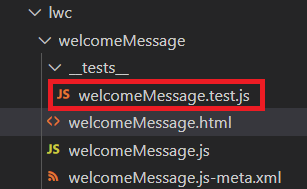 Writing our First test for the component (WelcomeMessage.test.js) 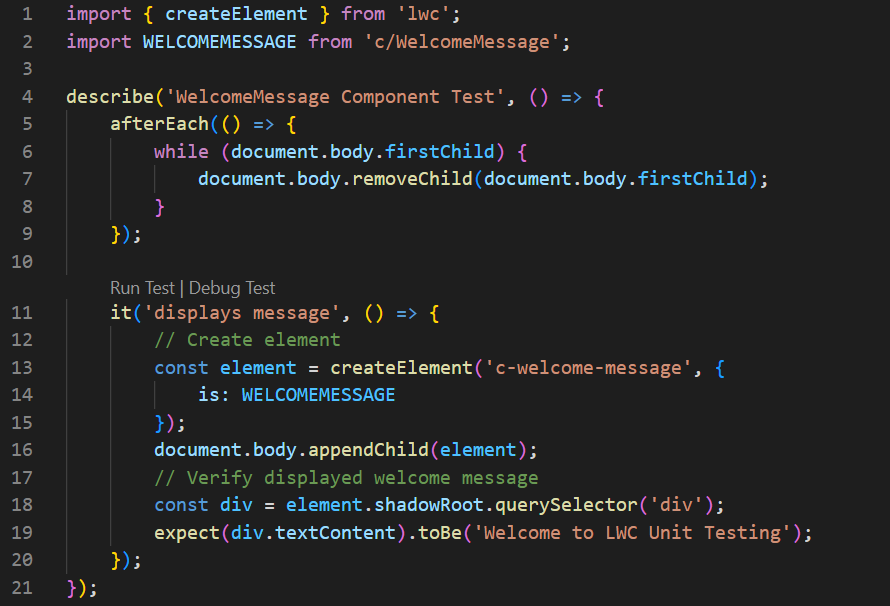 You can run your test case using the following command

After running the test cases you will see the following output indicating our tests have been passed with assertions.

Testing LWC components in Salesforce is still an unexplored horizon. Testing modern apps with lightweight LWC components for modern browsers requires thorough testing. Jest can help us with this – provided our tests are well written and cover all the spices of feature validations.